Consider an ellipsoid of revolution with equatorial radius \(a\), polar semi-axis \(b\), and flattening \(f=(a-b)/a\). Points on the surface of the ellipsoid are characterized by their latitude \(\phi\) and longitude \(\lambda\). (Note that latitude here means the geographical latitude, the angle between the normal to the ellipsoid and the equatorial plane). 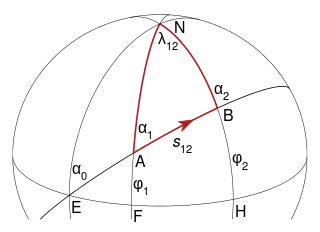 A geodesic can be extended indefinitely by requiring that any sufficiently small segment is a shortest path; geodesics are also the straightest curves on the surface.

The interface to the geodesic routines differ in two respects from the rest of PROJ:

The routines also calculate several other quantities of interest

If points 1, 2, and 3 lie on a single geodesic, then the following addition rules hold:

The shortest distance found by solving the inverse problem is (obviously) uniquely defined. However, in a few special cases there are multiple azimuths which yield the same shortest distance. Here is a catalog of those cases:

The algorithms implemented by this package are given in [Karney2013] (addenda) and are based on [Bessel1825] and [Helmert1880]; the algorithm for areas is based on [Danielsen1989]. These improve on the work of [Vincenty1975] in the following respects: